Quotes:
Governor Gordon is working on efforts to set Wyoming on a sustainable fiscal path and making government more accessible, productive and efficient. As part of those efforts, Gordon seeks to refocus government to better assist local communities with the tools and resources needed to thrive and set their own direction. He is also dedicated to ensuring that citizens have access to quality education, including safer schools, advanced degrees, and career and technical education opportunities.

Governor Mark Gordon has issued the following statement in response to Thursday’s announcement by the Biden Administration mandating COVID-19 vaccinations:

“The Biden Administration’s announcement to mandate COVID-19 vaccinations or weekly testing for private businesses is an egregious example of big government overreach.

Our Constitution was written and fought for to protect our liberties as American citizens. This administration’s latest pronouncement demonstrates its complete disregard for the rule of law and the freedoms individuals and private companies enjoy under our Constitution. In Wyoming, we believe that government must be held in check.

I have asked the Attorney General to stand prepared to take all actions to oppose this administration’s unconstitutional overreach of executive power. It has no place in America. Not now, and not ever.”

Mark Gordon was elected Wyoming’s 33rd Governor, on Nov. 6, 2018. He was sworn into office on January 7, 2019.
Growing up on the family ranch in Johnson County, Governor Gordon learned the values of hard work and integrity and the importance of working together. As Governor, he brings those values to the table in pursuing his commitment that Wyoming continues to be a place where its citizens can pursue their dreams while retaining its unique character. He is a strong believer in Wyoming’s ability to chart its own course and a staunch defender of its interests to do so.

Governor Gordon served as Wyoming State Treasurer from October 2012 until January 2019 when he was sworn in as Governor. As State Treasurer, he led a transformation of the office resulting in improved returns on state investments, better protection of state savings, and increased transparency and access to state financial data for the public. His efforts to improve transparency surrounding the state’s financial portfolio resulted in Wyoming being ranked number one in the United States for transparency and third in the world among all sovereign funds.

Governor Gordon and his wife Jennie have four grown children, Anne, Aaron with wife Megan, Bea with husband Austen, and Spencer with wife Sarah and their son Everett.

Mark Gordon (born March 14, 1957) is an American politician serving as the 33rd governor of Wyoming since January 7, 2019. A member of the Republican Party, he previously served as state treasurer; he was appointed to that position by then-Governor Matt Mead on October 26, 2012, to fill the vacancy created by the death of Joseph Meyer.

Gordon was born in New York City, the son of Catherine (née Andrews) and Crawford Gordon, both ranchers from Kaycee, Wyoming.[1] His paternal grandmother was philanthropist Louise Ayer Hatheway. His paternal great-grandfather was industrialist Frederick Ayer, founder of the American Woolen Company. Gordon is also a great-nephew by marriage of General George S. Patton and a first cousin once removed of Major General George Patton IV.[2][3] He was raised on his family’s ranch in Johnson County, Wyoming. He earned a Bachelor of Arts degree in history from Middlebury College in 1979.[4]

In 2008, Gordon was an unsuccessful candidate in the Republican primary for the United States House of Representatives for Wyoming’s at-large congressional district seat held by Barbara Cubin, who was retiring. His main opponent was Cynthia Lummis, also a former state treasurer and the wife of a Democratic former state representative, Alvin Wiederspahn.[5] Former U.S. senator Alan K. Simpson of Cody, considered a moderate Republican, defended Gordon’s candidacy but stopped short of an outright endorsement because he was also friendly with Lummis. Former U.S. senator Malcolm Wallop endorsed Gordon, as did the late Joseph B. Meyer, who was serving as state treasurer at the time.[6]

In the primary, Gordon garnered the endorsements of Wyoming’s two most prominent statewide newspapers, The Casper Star-Tribune[7] and the Wyoming Tribune Eagle.[8] Though polls and the financial advantage rested with Gordon in the primary campaign, he lost the nomination to Lummis.[9]

Gordon declined to run for Cynthia Lummis‘s seat in the U.S. House of Representatives in 2016, the one he ran for in 2008, and instead ran for governor of Wyoming in 2018. He won the Republican primary on August 21 and the general election on November 6, defeating Democratic state representative Mary Throne.[12] Gordon was inaugurated on January 7, 2019.

In November 2020, Gordon proposed $500 million in cuts to the Wyoming budget to account for declining revenue from the fossil fuel industry (particularly coal mining), which is crucial to Wyoming’s economy.[20] On April 2, 2021, he signed a budget passed by the Wyoming legislature that cut $430 million instead of the $500 million Gordon proposed,[21] due to improved budget forecasts for the year of 2021 and supplemental money from the American Rescue Plan Act[22] signed by President Biden. The budget Gordon signed decreases the amount cut to the University of Wyoming and the Wyoming Department of Health.

In 2021, a New York Times investigation revealed that Gordon had been targeted by hard-right conservatives, such as Susan Gore, the heiress to the Gore-Tex fortune. Gore funded secret operatives who targeted Gordon.[23]

Gordon met his first wife, the former Sarah Hildreth Gilmore, at Middlebury College. They married on March 7, 1981, in the Second Congregational Church in Greenfield, Massachusetts, where her parents resided. In 1993, she died in an automobile accident.[24] They had two daughters.

In 1998 Gordon met his current wife, the former Jennie Muir Young, and they married in 2000. Together they own the Merlin Ranch east of Buffalo in Johnson County, Wyoming. In 2009, their ranch received the Society for Range Management Wyoming Section “Excellence in Rangeland Stewardship” award.[25]

On November 25, 2020, during the COVID-19 pandemic, Gordon tested positive for the virus on the same day his office was to be reopened after an employee of his had tested positive earlier. Gordon’s office remained closed temporarily for deep-cleaning after his diagnosis.[26] 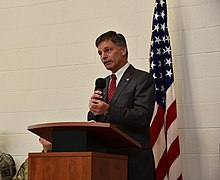 OnAir membership is required. The lead Moderator for the discussions is Fatima Iftikhar. We encourage civil, honest, and safe discourse. See Terms of Service for curation guidelines.

This is an open discussion on the contents of this post.